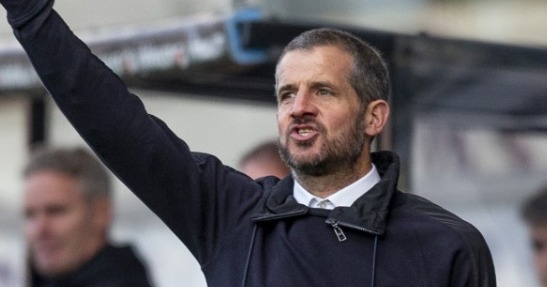 Dunfermline have sold star striker Kevin Nisbet to Hibs - in a deal thought to be worth six figures.

The 23-year-old, who scored 23 goals in 32 appearances last season, joins Jack Ross's side on a four-year deal.

Meanwhile the Pars have moved to sign forward Kevin O'Hara from Alloa on a three-year deal.

He scored 14 goals in 35 appearances for the club last season.

O'Hara told the club's official website: "I am absolutely delighted to come to Dunfermline, it is a massive club and I have enjoyed playing here over the years. I am a Dunfermline player now and my aim is to score goals and make Dunfermline as good as it could be."

Crawford said: "Last year Kevin was given a platform by Peter Grant at Alloa and he did fantastically well for them. He probably got a bit of belief in himself that he could score goals at that level. We are very fortunate that we have somebody coming in at 21 years of age with a good part of his career now ahead of him."

Striker Declan McManus is also back at East End Park, where he spent a season in 2017/18.

He said: "I am buzzing, delighted to be back and I feel that there is unfinished business for me here. I really really enjoyed my year here and leaving at the time wasn’t an option that was easily taken."

Crawford said: "To bring in Declan McManus, who had a spell at the club a few years ago, is good because he is very popular with the supporters and he wears his heart on his sleeve."

And winger Dom Thomas has also signed on a two-year deal, after compensation was agreed with Kilmarnock. He spent time on loan with the Pars last season.

Thomas said: "It is great to be back. I got a taste for it from January until the shutdown, I really enjoyed my time here and I am just glad that it is now on a permanent basis. I look back with great memories and I just look forward to making some new ones."

Crawford said: "He is creative, I had said that I was targeting a wide attacking player and Dom was my number one target on that. I think it shows the ambition in ourselves that we have managed to get him from Kilmarnock, a Premiership club and also Dom sees Dunfermline as a very good fit for the stage that he is at in his career."