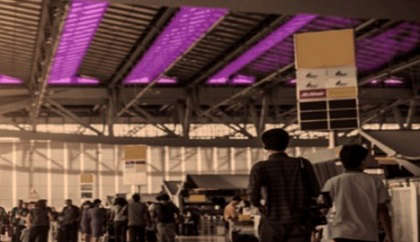 A new type of ultraviolet light can efficiently kill airborne microbes, such as those which cause coronavirus, that could help prevent future outbreaks, a study led by St Andrews University has found.

It comes after successful trials were carried out, with results suggesting that Far-UVC could be used to significantly reduce the risk of person-to-person indoor transmission of hospital acquired infections as well as airborne diseases such as Covid-19 and influenza.

The research has been published in the Nature Scientific Reports journal, with NHS Tayside, Dundee and Leeds Universities, as well as Columbia University in New York, all involved.

It's the first study to measure the performance of Far-UVC under full-scale conditions.

The researchers released an aerosolised bacteria, known to be harder to inactivate than the SARS-CoV-2 virus which causes coronavirus, into a room-sized chamber and then tested the level of microbial reduction when it was exposed to the Far-UVC light.

At a bioaerosol facility at the University of Leeds, the trials were held and it was found that Far-UVC light rapidly and continuously reduced levels of airborne microbes with a greater than 95 per cent reduction recorded even when the bacteria aerosol was continuously introduced.

The university said last year that while conventional UVC light can cause acute skin reddening and eye damage, Far-UVC doesn't seem to cause the same issues, with the university saying that existing studies show that Far-UVC is likely to be safe to use in occupied indoor places.

But more trials are going to be carried out, with a skin study ongoing at Ninewells Hospital in Dundee and an eye study being carried out at St Andrews.

Dr Kenneth Wood from St Andrews University's School of Physics and Astronomy has been chatting with Anas Hassan, our Kingdom FM reporter, about the studies carried out so far: