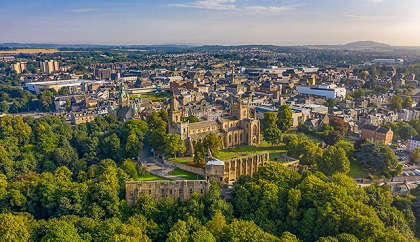 The Fife location won city status as part of celebrations for The Queen's Platinum Jubilee, but St Andrews missed out after putting in a bid in to become a city as well.

Scotland's ancient capital has achieved the status alongside other places:

Alister Jack MP, the Scottish Secretary, has congratulated Dunfermline on becoming a city.

He said: "Warmest congratulations to Dunfermline on gaining city status.

"Businesses and communities alike will enjoy the benefits of this prestigious new title.

"Being awarded city status can give places a real boost, from helping grow the local economy, to raising its profile, to instilling civic pride.

"For a place with such rich royal history, it is fitting that Dunfermline is becoming a city as we celebrate our longest-serving monrach's Platinum Jubilee.

"Its lovely green spaces and fantastic cultural attractions will ensure that this new city thrives well into the future."

Jim Leishman, the Provost of Fife, says the city status will allow Dunfermline's economy to grow.

He said: "The official title of city will give Dunfermline the wider recognition that it deserves as one of the fastest-growing, urban areas in Scotland, offering all the amenities that any modern city could hope for.

"City status will help us grow economically and as a tourist destination and will have a positive impact on Dunfermline and the surroundings.

"Of course, the people of Dunfermline have always known that Dunfermline is a city, that’s why we have the City Car Park, the City Hotel and City Cabs but it’s great to finally get official recognition of this.

"I’d like to congratulate Dunfermline and say thank you to all those who put in so much effort with the bid to get Dunfermline recognised as a city.

"And commiserations to St Andrews and all those who pulled out all the stops to put forward an excellent submission.

"We look forward to being able to say ‘officially’ – Welcome to the City of Dunfermline!"

Alan Mitchell, the Chief Executive of the Fife Chamber of Commerce, says Dunfermline and Fife's profile can be raised internationally.

"It's always lovely to be recognised.

"If that changes people's perceptions and makes them think, 'you know, I'd quite like to work and live in Fife', then that's a great thing.

"The very fact that Dunfermline is a city might means tourists and business investors might explore and try to understand what the opportunities are in Dunfermline and therefore Fife, when they simply wouldn't have done if it didn't come up in a Google search they did for cities in Scotland."

Shirley-Anne Somerville, Dunfermline's MSP, says it's a great opportunity for the new city:

Douglas Chapman, MP for Dunfermline and West Fife, says he is thankful for everyone's support towards the city bid: