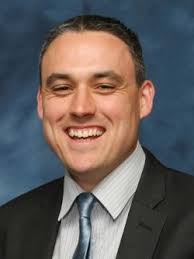 Labour candidate for Kirkcaldy and Cowdenbeath.

Kenny is 33, married with two young children and is from the surrounding area.

Kenny attended Buckhaven High School and has an honours degree in Politics and Media Relations from the University of Northumbria.

Before entering politics he worked as a labourer, then worked up into management roles at retailer Somerfield, before becoming a Human Resources Assistant at the Scottish Prison Service.

He was elected as a Fife Councillor in 2012, and is Chair of the Safer Communities Committee. He is a 'champion' for Drug and Alcohol Recovery and Council Employment Health and Safety. Kenny has led the Fife White Ribbon campaign against domestic violence.

About Kirkcaldy and Cowdenbeath

Kirkcaldy is officially the most populated town in Fife, home to just under 50,000 people, and nicknamed "the lang toun" due to its historic high street, which at one time stretched to four miles long.

The town was the world leader in Linoleum manufacturing until the 1970's, but has since become an administrative, service, and retail centre for the wider Fife area.

Cowdenbeath is a forming coal mining town with a population of around 11,640.

Burntisland, Dalgety Bay, Dysart, Kelty, and Lochgelly are the other towns in the constituency, which includes the villages of Aberdour, Auchtertool, Ballingry, Crosshill, Glencraig, Kinghorn, Lochore and Lumphinnans.

Some of the highest levels of deprivation in Scotland have been recorded in parts of the constituency, including the worst off areas within the two main towns.

There are six secondary schools in the area - Balwearie, Beath, Kirkcaldy, Lochgelly, St Andrews, and Viewforth - and around 20 primaries.

The area is home to Raith Rovers and Cowdenbeath football clubs, who both play in the SPFL Championship, and Elite League ice hockey club Fife Flyers.

Famous philosopher Adam Smith, who has influenced economists for generations, was born in Kirkcaldy and wrote 'The Wealth of Nations' there.

Kirkcaldy and Cowdenbeath is considered possibly the safest parliamentary seat in Scotland, with former Prime Minister Gordon Brown winning 65% of the vote in 2010, compared to the SNPs 14%.

Mr Brown, who was Chancellor of the Exchequer for 10 years, has been the local MP since the constituency was formed in 2005, having previously served Dunfermline East for over 20 years.

However the SNPs David Torrance took Kirkcaldy in the 2011 Scottish Parliament elections. Helen Eadie won Cowdenbeath for Labour. Following her death in 2013, former Fife Council leader Alex Rowley won the by-election for the party in early 2014.

The main constituency issues - in his opinion:

Who else is standing here:

Why Kenny Selbie thinks you should vote for him: