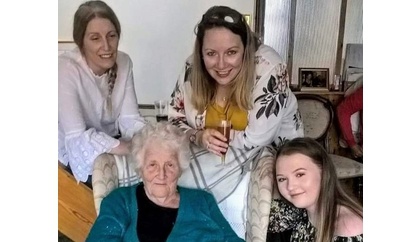 A woman is encouraging people to register for an online event where cardiac experts will share potentially life-saving advice after her Fife mum had a collapse like the one footballer Christian Eriksen recently had.

49-year-old Sarah Latto, her mother Doreen Scott, who lives in Crail and is 89, and Sarah's daughter Jasmine, 15, all share a rare genetic marker that wasn't diagnosed until two separate accidents at home.

Sarah was one of millions of stunned television viewers who saw the captain of the Denmark men's team Christian Eriksen collapse during his country’s European Championship game with Finland last Saturday.

The 29-year-old attacking midfielder's life was saved by prompt action from the medical teams in place at the match.

Sarah's own collapse happened at home.

A GP referred Sarah to a cardiologist after a dizzy spell resulted in a minor injury to her head.

Nobody in the family had suffered any cardiac episodes up to then.

Whilst Sarah waited for blood test results, her mother Doreen was also hospitalised after suffering a cardiac arrest, like Eriksen.

Further tests resulted in both of them being diagnosed with the inherited cardiac condition Long QT Syndrome.

Genetic screening of the whole family soon revealed that seven relatives, aged nine to 76 at the time, shared the same gene mutation.

Since the diagnosis, Sarah has a motto that is "be thankful for today and pray for a fun-filled and healthy tomorrow".

She encourages anyone who has had dizziness or has a family member who died unexpectedly to find out more and get themselves screened.

The online event on Wednesday (23 June) is being run by the Network for Inherited Cardiac Conditions at 6.15pm.

Around 10,000 people who live in Scotland have an inherited cardiac condition.

For many families, the first sign there’s something wrong is when someone dies suddenly, without an obvious cause.

It is thought that inherited cardiac conditions are responsible for the deaths of around 50-60 young people in Scotland per year.

Sarah said: "It was frightening to think that I had passed something on to my daughter genetically.

"But at the age of nine Jasmine took it all in her stride.

"She told me, ‘Mum if my heart is as special as yours then I’ll be just fine.’

"This made me cry but in the same heartbeat, it gives me the strength to give back, like I’m doing through the talk for the online event run by the Network for Inherited Cardiac Conditions.

"When we saw Erikson's collapse, or anyone for that matter, you hope and pray for them to survive cardiac arrest and for that chance to be with their family and loved ones again.

"The chain of survival and promoting this is key – having people trained in CPR and not frightened to do it.

"That was key to my mum’s survival, too."