LISTEN: Winner of Kingdom FM's 'Word is Out' revealed after year-long competition 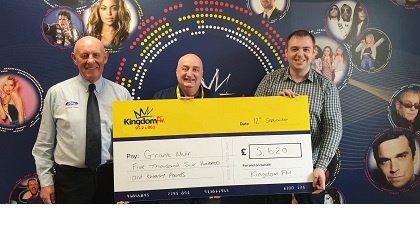 A man from St Andrews has become over £5,000 richer after correctly guessing the answer to Kingdom FM's 'Word is Out' game.

Grant Muir, who's 59, was named as the lucky winner of the £5620 jackpot, after predicting "sidekicks" as the ending to the phrase "…and my specialist subject is…"

The game had puzzled Fifers for over a year, with nearly 800 on-air guesses made since the competition's launch in August 2018.

But it was lucky Grant who identified the missing piece of the puzzle on Wednesday August 11, during the Dave and Vanessa in the Morning show.

"I just couldn't believe it when the phrase came out at the end," Grant said.

"I was just totally shocked because I didn't actually think it was the answer.

"Vanessa gave out the clue saying that she said it during the presentation at the Kingdom FM Local Hero Awards.

"Just seconds after that Dave said, "some comedians need this." And I thought, "Hmm, she could have called him a sidekick", and a lot of comedians need sidekicks.

"So I thought, I'm going to try that the next time."

But when asked how he'd spend his winnings, instead heading off on a lavish holiday, Grant said his ambitions are very humble:

"My washing machine just broke just a couple of days ago, so I've ordered a new one! I'm needing a new shed and I've got two big birthdays coming up so it'll go towards some celebrations."

"It can't believe it took a year for this to be won! When Grant said the right word, it caught me as much by surprise as the listeners.

"I'm delighted for him and it's great to be able to offer such a big prize purely to Fifers."

The competition was sponsored by Lamberts Garage in Leven.

Scott Lambert, owner of Lamberts Garage, said: "I'm delighted, I just wish it was me!"