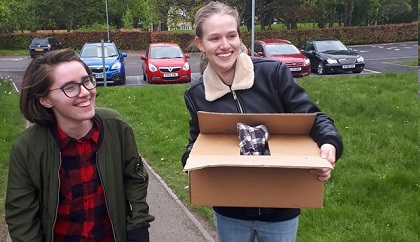 Katy Lee and Erin Rawles, who are both in third year studying Art History and Social Anthropology and International Relations and Geography respectively, were coming back from shopping when they spotted local man John Fettes and his daughter having difficulty catching the distressed duck with a towel and fishing net.

Both Katy and Erin were among a group of students and locals trying to help.

The duck had taken flight and disappeared after it was chased from one side of Fife Park to the other.

The crowd scattered but Katy thought the duck wouldn't have gone far and decided to keep looking.

But she wasn't aware the rescue attempt had been going on for several days since DRA managers raised the alarm.

Rescue officers had made several failed attempts to catch the duck.

Katy later found the duck hiding under a bush by the Riggs building.

She said: "I could get within arms-reach of him, but he was very uneasy and waddled away so I just followed him around for a good ten minutes at a respectful distance, sometimes pretending I wasn’t interested in him, just so he could get used to my presence and wouldn’t think I was trying to eat him.

"At this point I texted Erin requesting peas which might help me lure him out (even though he couldn’t eat).

"Eventually I managed to corner him against one of the buildings and spent a fair bit of time just talking to him and ‘speaking duck’, something I used to do with ducklings who lived by my house."

Katy claims 'speaking duck' involved a high-pitched whistle through the teeth that sounds like a baby bird.

She added: "He seemed really responsive to that and let me get within a couple of feet of him.

"I was able to grab him really easily then and thankfully managed to keep his wings against his body so he didn’t get hurt.

"I wrapped him in my flannel shirt and was stuck like that for a good ten minutes more before Erin arrived with the thawed peas to discover I had already caught him.

"She gave me my phone before going back to get some tools, which is when I looked on social media and discovered that this duck was the subject of widespread concern.

"We tried to cut the can off but quickly realised we wouldn’t be able to without hurting him.

"Unable to get through to the SSPCA, we called Provost Vets who told us to bring him in.

"After ungracefully stuffing him in a box we walked over to Provost where they were able to safely remove the can."

While walking back from the vets, Katy and Erin ran into John Fettes and his daughter, who led the rescue effort.

John said: "We’d heard the duck had been sighted down at the DRA so we gathered a few people from Facebook to get him as we expected he was now getting tired.

"We searched the ponds at the DRA with no luck then we decided to leave and go check Lade Braes again.

"Luckily we bumped into Katy and Erin."

Together they released the duck back into the DRA pond where his mate looked to be waiting for him.

The ducks were happy to be reunited.

Katy said: "I was lucky enough to find and catch him, but without an entire community trying to help I wouldn’t have noticed the situation in the first place.

"I am especially grateful to everyone who helped tire him out in the hours before I caught him as I’m sure that helped, and also to Provost for their willingness to help and treat him free of charge."

Hundreds of people across the community are relieved about the happy ending.

There have been promises of a drink to Katy and Erin from townspeople once the coronavirus lockdown is over.

Meanwhile Lindsay Elliot has been keeping an eye on the duck, saying he is on good form with a healthy appetite.

As an environmental facilitator for her hall of residence, Lindsay hopes this story will encourage people to dispose of their waste responsibly and help towards a litter-free Fife.