More than 1.2 million children are sold into slavery every year 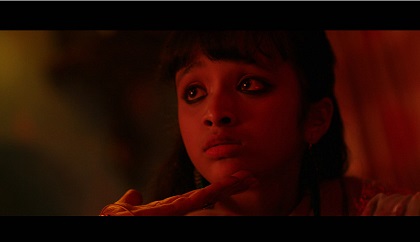 A charity is showing a film in Fife to raise awareness of how human slavery still exists in the modern world.

Hollywood is coming to St Andrews to campaign against human trafficking.

Every year thousands of women are sold into slavery and Childreach International are working to stop this exploitation.

The organisation's latest campaign is Taught, Not Trafficked and as part of the Byre Theatre in St Andrews will be screening the film SOLD starring Gillian Anderson and Executive Produced by Emma Thompson.

There will be a special panel of local experts, including the Bishop of St Andrews, Stephen Gethins MP, Professor Ali Watson and Dr Jeffrey Murer after the showing on 26 January 2017.

SOLD tells the story of Lakshmi, a thirteen year-old Nepali girl sold to a brothel in India.

An extraordinary tale of survival, SOLD is an incredibly powerful film that inspires audiences to take a stand.

Approximately 80% of all trafficked children worldwide are girls. Before 2015, an estimated 20,000 girls were being trafficked from Nepal every single year and forced into domestic servitude and sexual slavery.

It is estimated human trafficking between India and Nepal has increased by 300% since the earthquakes in 2015.

This Hollywood-charity partnership recently appeared at the prestigious Trust Women Conference in November 2016 to discuss the importance of education in preventing child trafficking in Nepal, and how their Taught, Not Trafficked campaign is raising awareness and tackling the root causes behind this horrifying crime.

With funds raised, Childreach International prevent the exploitation of children by ensuring they complete their education.

Evidence suggests that if a child stays in school until they are 16 years old, they are significantly less likely to be trafficked or exploited.

To date, money raised for the campaign has enabled Childreach to open 86 earthquake resistant classrooms in the Sindhupalchowk district – allowing 2,082 children to return to school after their classrooms were destroyed.

As well as this, the campaign engages children in discussions on child rights, gender equality and trafficking through sports and games, works with survivors for community awareness and trains teachers on an anti-trafficking module for the classroom.