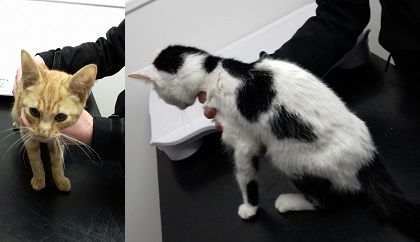 A man has been banned from keeping animals after his dog was found dead with injuries consistent with being hit or kicked.

Paul Kyle, from Martin Crescent in Ballingry, has been convicted of five seperate offences after the dog, along with two neglected cats, were found at his home.

He also been handed 270 hours of community payback.

"Upon a veterinary post-mortem examination, Mercury was scored with a body condition score of 1/9.

"She weighed 16.2kg, which is just over half of what she should have, and had nearly no body fat.

"The post-mortem also concluded there had been blunt trauma to the ventral and left side of the neck, cohesive with being hit with a blunt object or kicked.

"She will have shown pain due to the trauma and veterinary attention should have been sought.

"Both Mars and Jupiter, the cats, were seen by a vet and were given body scores of 4/9 and 3/9 respectively.

"Both cats were covered in fleas and dirt.

"Kyle admitted to abandoning Mercury, Jupiter and Mars between 23 April and 2 May.

"I’m happy the courts have dealt with this case and this sentence handed out.

"This level of neglect didn’t happen overnight and could have easily been avoided."