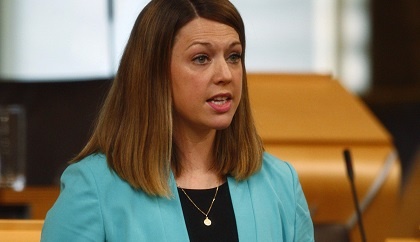 Glenrothes MSP Jenny Gilruth is to become a Minister in the Scottish Government.

Her new portfolio will include responsibilities for Europe and International Development.

Gilruth will support Mike Russell and his role in the government is being expanded as Cabinet Secretary for the Constitution, Europe and External Affairs.

First Minister Nicola Sturgeon said: "Jenny Gilruth will join government for the first time - having proven herself as a talented and hard-working MSP - and takes on the role of Minister for Europe and International Development.

"She will have the important task of promoting Scotland, building new links in a post-Brexit environment and delivering on our global responsibilities - and I know she is more than up to that challenge."

The First Minister is also making a range of other appointments, including putting Kate Forbes into the post of Finance Secretary.

It comes around a week and a half after the resignation of former Finance Secretary Derek Mackay.

Fiona Hyslop will become Cabinet Secretary for the Economy, Fair Work and Culture.

Ben Macpherson will become Minister for Public Finance and Migration while Fergus Ewing will take on responsibility for tourism as Cabinet Secretary for Rural Economy and Tourism.