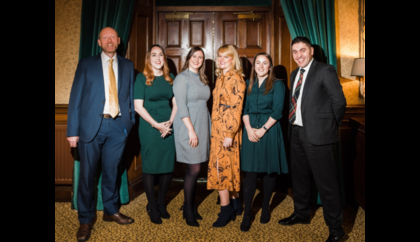 Staff from the hotel

A hotel in Fife has been named the world's Best Destination Wedding Hotel in an international ceremony.

Balbirnie House appeared in the global category at the international Haute Grandeur Awards in Kuala Lumpur.

It is the first time this particular accolade has been given to any hotel in the Western Hemisphere.

A six-strong team from the venue travelled to collect the award.

"This was immediately noted by Haute Grandeur, adding yet another further level of contemplation for global judging.

"We are aware that Haute Grandeur are able to deploy research teams globally, but cannot find any hotel in any other country in the world, which has had anything comparable in their own country, to the recognition that Balbirnie House has received here in Scotland."