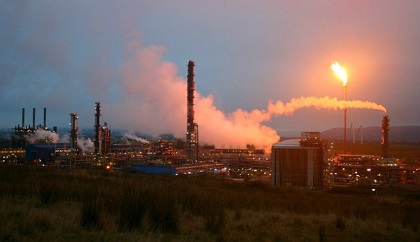 Representatives from ExxonMobil have told Fife councillors it was "nearly impossible" for the plant to affect the air quality in local communities.

At the environment and protective services committee yesterday, officials from the Fife Ethlyne Plant - which has been out of commission since August for major repair - addressed concerns from local residents.

Kylie Bishop, environmental engineer,  told councillors that despite "misinformation" on social media, air quality had not been seriously affected by flaring.

She said: "Wood PLC carried out an independent study that modelled the air quality. Even in unrealistic situations, with the flare running at 200 per cent, 300 per cent of what is capable, it was not possible for the plant to cause air quality issues in local communities.

"On air quality, we feel confident there is no environmental risk."

Councillor David Barratt asked if this calculation took into account the pollution from the ground flare as well as the stack flare.

Ms Bishop confirmed it did, adding: "The model considered both sources at maximum and over maximum capacity, and it came back with results which said it was near impossible to affect air quality."

She added: "But we need clear communication as to why people shouldn't be concerned. There is a lot on social media that I find alarming. We need to make sure there is sound, scientific information out there."

ExxonMobil recently announced a £140 million investment to upgrade the plant.

Ms Bishop told councillors that the bulk of the work was being carried out in regards to noise and vibration pollution, which, after a year long, detailed study, came out as the root of many problems.

She added: "We hired RMP Acoustics which gave us detailed data on the root cause of the noise, giving us information on how to prevent, or at least seriously mitigate the noise which is causing it.

"It has been an incredible success, with the mitigation reducing offsite noise significantly. In addition to the data, we received no noise complaints from the community during recent flaring.

"We have only rolled out three of the 12 mitigation actions and will continue to carry out acoustic tests."

As part of the £140m investment, a new flare tip would be installed by summer that would make the flame "shorter, fatter and lazier" as well as a new ground flare which reduces the light and visibility impacts, which is expected to be up and running by the end of 2023.

Councillor Ross Vetriano said: "It is important that communications continue with the community - that's the essence of the situation here.

"It is essential that people understand the real situation and not be persuaded by ill judged comments on social media."