Council calls for study to look at closing Mossmorran 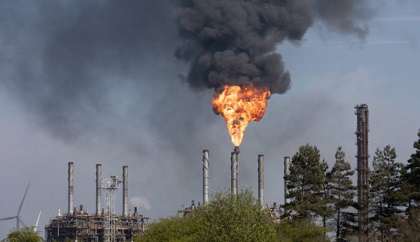 Fife Council have called for a report to look at decommissioning Mossmorran.

At a meeting on Thursday, councillors voted for an independent report which would look at the long term viability of closing the plant.

In a joint Labour and Conservative motion, councillors voted to “seek discussions with the UK and Scottish governments regarding the long term future and a possible strategy for its decommissioning”.

The agreed plan will also request that the Scottish Government appoint someone to carryout an independent expert study of the environmental, social and health impacts on the communities and seek appropriate compensation from the companies to those affected by the flaring.

The Shell ExxonMobil plant has come under fire in recent weeks after the latest bout of unscheduled flaring.

He  added: “During flaring events, concerns have been raised over sleep deprivation, children scared that the plant is going to explode. Depriving children of sleep is bound to be affecting their educational attainment.

“There’s stress, nausea, chemical smells during flaring. It’s a whole wide range of issues and it creates an unsettled community during flaring events. Because of lack of action for so many years there is also a lack of trust.”

Almost 900 complaints were made to the Scottish Environment Protection Agency (SEPA) about Fife Ethylene Plant in just one week.

The group called for an independent report into the flaring activities and the health damages it could potentially be causing.

The motion was proposed by Conservative councillor Richard Watt who said: “Fife communities are being exposed to these conditions for days on end. The noise is constant and drones on throughout the day and night.

“While many people know that flaring of the plant is necessary, they can not and will not tolerate the sheer number of unplanned and unscheduled flaring events.

“Unplanned flaring is just that – something has gone wrong, and for safety reasons they need to flare.”

Labour councillor David Ross proposed an amendment to the motion, which was accepted by Cllr Watt.

Cllr Ross said: “There is a general agreement on the need for an independent investigation into Mossmorran. We have seen some improvements, but this last example is a tipping point. We need to see firm action now.

“We should also start to look at decommissioning. No one is suggesting that this happens overnight or even in the near or medium future. But given the impact it is having, we need to be able to give our communities some light at the end of the tunnel.”

SNP proposed their own amendment to the proposal, which would see Fife Council lead the way in the report, with Councillor Ross Vettranio saying: “The council agrees there is a need to commission an independent expert study but believes the council is best placed to drive this forward.”

He added: “We can ask the government to carry out a review. They might, but the local community will continue to suffer. In asking someone else to do it, it means we might not get that action now.”

They were also opposed to looking into a study to decommission the plant.

It was supported by Councillor David Barratt, who said: “The genuine concerns are legitimate and the people are rightfully fearful. The SNP amendment simply calls for us to get on with it now.”

However, the Conservative and Labour joint motion was voted through 32 to 23.