Concerns around reduction of police on Fife streets 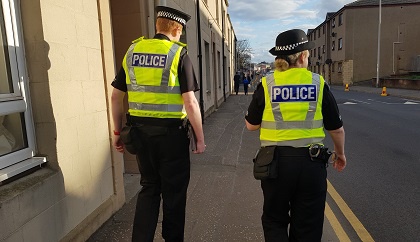 There are concerns Fifers are feeling less safe than they did three years ago due to a reduction in police officers on the street.

Figures from the Scottish Crime and Justice Survey has found more than half of people in Fife feel there is not enough police presence in their area.

Data from the survey, which was published this week, also revealed that only 7.6% of Fife residents in 2016-18 believed the local police force regularly patrolled their community on foot.

And only 1.7% of Fife residents felt the local police regularly patrolled their area by bicycle in 2016-18.

The survey began in 2012, the year prior to Police Scotland being created.

Mr Fraser, who represents the Mid Scotland and Fife region, expressed his concerns at the alarming figures produced by the survey.

Commenting, he said: “Since the SNP merged local police forces, people across Tayside have noticed fewer and fewer police officers on our streets.

“We know that the number of constables on frontline duties has reduced since Police Scotland was created.

Chief Superintendent Derek McEwan, Divisional Commander for Fife, said: "I want to reassure the communities of Fife that foot, bicycle and vehicle patrols continue to make up a large part of the day-to-day duties of frontline officers within the Kingdom.

"Fife has always led the way in community policing, and being seen within its communities. This will always be the case.

"Patrols are an essential part of our engagement with the public and provide us with opportunities to gather information on ongoing community issues, as well as deterring and detecting criminal activity.

"We will continue to utilise patrols as part of our policing plans and have no intention on ceasing their use."