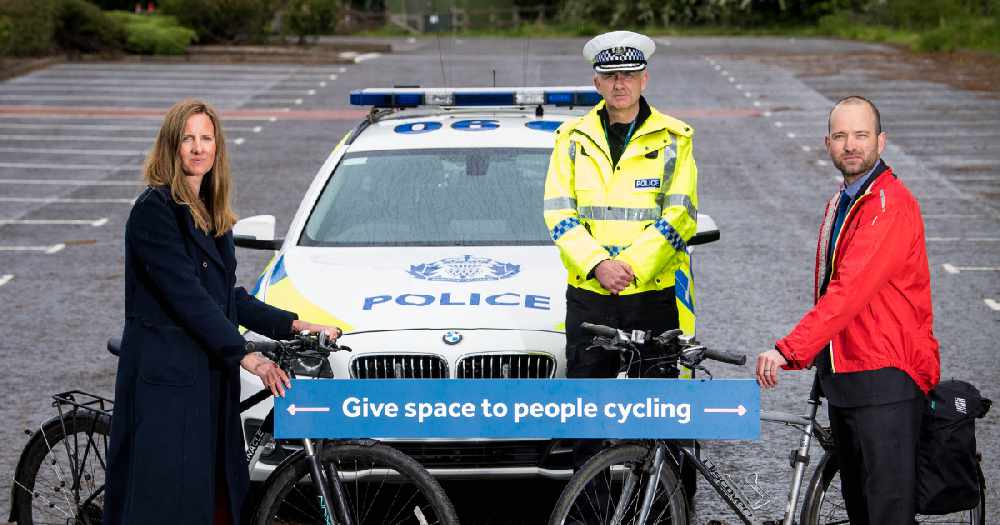 Nine in ten drivers in Scotland say motorists who close-pass people who cycle put lives at risk, according to new research from the nation’s cycling organisation.

More than six in ten (63 per cent) said people would be more likely to cycle than drive if they felt safer on Scotland’s roads.

And 57 per cent agreed that more people cycling instead of driving would help Scotland tackle the climate emergency.

These are the findings of a new study of 509 Scotland-based drivers commissioned by the nation’s cycling organisation – Cycling Scotland – to mark the launch of its annual nationwide campaign today (Tuesday 1 June).

Cycling Scotland’s Give Cycle Space campaign – which features a 15-second TV ad shot from the perspective of people who cycle to show what being close-passed feels like – is supported by Police Scotland.

It is a careless driving offence for motorists to close-pass (overtake with less than a car’s width) someone cycling. People can get a fixed penalty of three points on their driving licence and be fined £100 – or receive a criminal conviction for more serious offences.

Paul Kettles, 49, is a professional driver from Fife. In 2019 he was involved in an incident with a cyclist when overtaking, causing them minor injuries.

He said: “I was just so relieved they weren’t seriously hurt; it could have been much worse. I got points on my licence, a fine and had to do training to learn how to drive safely around people on bikes, including getting on a bike myself.

“The experience has changed me – I now can see the road from the perspective of someone riding a bike.

“I always give space to cyclists when I pass them on the road, and I wouldn’t attempt overtaking near a corner or blind summit. I also think about whether there’s a benefit of overtaking – if I’m in the city there’s often no point as traffic lights are turning to red ahead of us.

“What I’d say to any driver is it’s not worth the risk. And even if you squeeze past a cyclist and don’t hit them, it’s really scary for them. I think we all need to understand these risks and share the roads.”

Scotland has seen a big increase in the number of people cycling since March 2020 and, according to Cycling Scotland Head of Communications Denise Hamilton, that makes this year’s Give Cycle Space campaign doubly important.

She said: “Every week in Scotland, at least three people are seriously injured while cycling.

“Dedicated cycling lanes, separated from road traffic, are the number one priority to make our roads safer for cycling and as we build this network, we need more education and enforcement. The Give Cycle Space campaign educates drivers about leaving at least a car’s width when passing people on bikes, supported by Police Scotland’s Operation Close Pass.

“Greater enforcement activity, both by police and cameras, has a proven impact on improving driver behaviour. We support the campaign for an online third-party reporting system in Scotland so dashcam footage can be used to detect and tackle dangerous driving.

“With more people taking up cycling in the last year, it’s more crucial than ever that we improve safety on our roads.

“For Scotland to achieve net zero emissions, we need more journeys by bike so we have to tackle safety concerns that are the major barrier.”

Minister for Transport Graeme Dey said: “Close-passing on Scotland’s roads is unacceptable and continues to put lives at risk. It is so important that people who choose to cycle are not left frightened or put off by irresponsible overtaking from motorists.

“We know that separated active travel infrastructure is key to making people feel safer. We’re investing record levels to support this – but people choosing to cycle should feel safe to do so on our roads too. This belief is at the heart of Scotland’s updated Road Safety Framework, where we have the ambition to have the best road safety performance in the world by 2030.

“I’m pleased to support the launch of the Give Cycle Space campaign by Cycling Scotland, and it is right that this campaign and its important message is reinforced by further education and enforcement activity from Police Scotland.”

Cycling Scotland’s campaign – which runs on television, radio, online and on buses – is funded by Transport Scotland and backed by Police Scotland. Over the summer, Police Scotland will conduct Operation Close Pass in locations across Scotland to promote the safe use of shared road space.