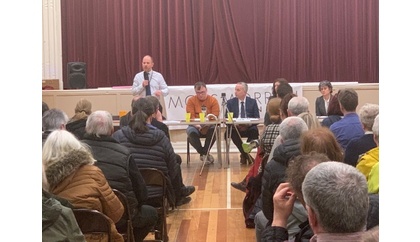 Around 120 people went to a public meeting organised by Mossmorran Action Group at Lochgelly Town Hall.

Assurances were made everything possible was being done to cut the number of episodes of unplanned flaring.

But locals angrily made their views known, describing their frustrations over the stress they have experienced, because of unplanned flaring.

The meeting took place around a week after elevated flaring at the Fife Ethylene Plant, which was seen for many miles across the Kingdom and in other places like Edinburgh last Thursday night (13 February).

ExxonMobil, who run the plant, apologised last week for any concern caused to local communities.

It comes six months after the facility's temporary closure and ExxonMobil thanked locals for their patience during the process to re-start the plant.

After last night's meeting, Head of Environmental Performance at SEPA Chris Dailly said: "I think we have got a bit of work to do in terms of engaging with the community further around the monitoring work we do.

"There's still maybe a bit of lack of trust there in terms of our role in what we're doing.

"But I think there's a really good story to tell there so I'll be really interested in exploring with the community how we get them along, how we get them more interacting with us and being able to answer questions."

Shell run the Fife Natural Gas Liquids plant, which is next to the ExxonMobil operated Fife Ethylene Plant.

Manager of the Shell FNGL plant Teresa Waddington was at the meeting to hear the concerns from members of neighbouring local communities and said: "It was important for me to attend this evening to listen to our neighbours' concerns.

"I appreciate the effect flaring has had on local people and how they feel.

"As I said in the meeting, we're committed to minimising the impact of Shell's operations on local people and have taken concrete steps to do this, while continuing to supply important energy products to communities in Scotland and the UK which depend on them."

ExxonMobil was not present at last night's meeting and said it takes part in public meetings, organised by Community Councils, to engage with local communities.

The Health and Safety Executive (HSE) was also not at the meeting and claimed it didn't receive an invite.

Cowdenbeath Community Councillor Pete Millmore felt the panellists who were present were courageous and said: "I think it's a really good forum for people to get their views across.

"In some ways, you end up with sympathy for the people who come and are brave enough to come and stand up, because they don't seem to have the answers.

"They don't seem to be able to put our minds at rest."

Halbeath Village Tenants and Residents Association's Public Relations and Engagement Officer Bryce Goodall, who is also a member of the Mossmorran Action Group, thought collective action was needed to address the issues and said: "By coming together as a collaborative group and taking action, we need to do that.

"And the only way we're going to do that is by putting ourselves above a parapet, being courageous and being brave and being bold."

In a statement, ExxonMobil said: "We are actively undertaking a programme of public meetings with our local communities, coordinated through their elected Community Councils.

"These conversations allow us to hear a range of views, share facts and answer questions, as well as enabling direct discussion between the public and ExxonMobil senior managers on the issues that matter for that town or village.

"Each meeting has been well attended and constructive."