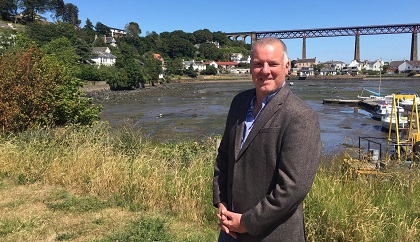 There are calls for Dave Coleman to stand down

There are calls for the Conservative candidate in the Dalgety Bay and Inverkeithing by-election to stand down over inappropriate comments made on social media.

The remarks appear on the Facebook page of Dave Coleman and are dated April 2010.

One makes reference to a derogatory term for a disabled person, while another calls people shopping at supermarket chain Lidl “chavs” and “pikeys”.

There are now calls for Mr Coleman to remove himself as a candidate from the council by-election.

SNP candidate, Neil Hanvey, said: "These offensive Facebook posts by the Scottish Tory candiate are totally unacceptable and not befitting of someone seeking public office.

"Dave Coleman should stand down from the contest at once - if not then Ruth Davidson must remove him."

Billy Pollock, standing for Scottish Labour, said: "Anyone who mocks people with disabilities is not fit to represent the electorate, it saddens me that any political party would select a candidate making these type of comments.

"Mr Coleman’s Tory party are a party that are driving people to the depths of despair with their savage cuts and yet he has the audacity to mock those suffering from mental health issues."

Dave Coleman has responded to the concerns raised by other candidates, saying: “These were daft comments made as a joke 8 years ago and I understand that this isn’t the kind of language expected of a councillor.

“I sincerely apologise to anyone upset by them.”

The election is being held on Thursday the 6th of September, to replace now-shadow secretary of state for Scotland Lesley Laird.

The candidates standing for election are: