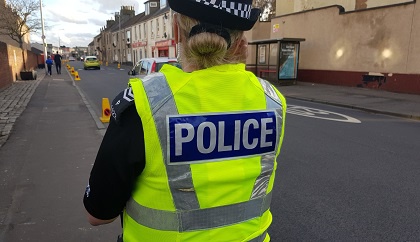 Police Scotland issued 25 fines to people failing to adhere to strict coronavirus guidelines at the weekend.

Officers were given the power to issue fines to people who are outside without a 'reasonable excuse'.

The force says initial indications suggest most people are adhering to the laws, designed to slow the spread of the illness.

Deputy Chief Constable Malcolm Graham said: "We’ve had high visibility patrols in place right across the country since we were given these enforcement powers.

"But it’s clear that the vast majority of people are complying with the measures.

"They know the message is to stay at home, and by and large, they’re doing that.

"Where our officers have encountered people outside, they’ve been able to engage with them or educate them on why it’s so important to follow the guidance from our public health experts in order to save lives and protect the NHS.

"There will always be people who refuse to comply, but the low number of penalty notices shows they are in the minority and in those cases we’ve had to use enforcement as a last resort.

"This is a big change to the way people live their lives and they need to adjust to that.

"There were issues with people driving to some outdoor spaces such as parks and we will address this, working with our partners in local authorities where appropriate.

"We have been given extraordinary powers in an extraordinary situation, powers we would not normally wish to have, but I’d like to thank the public for helping and supporting us.

"We police with the consent of the communities we serve, so a positive relationship with those communities is of huge importance to us."